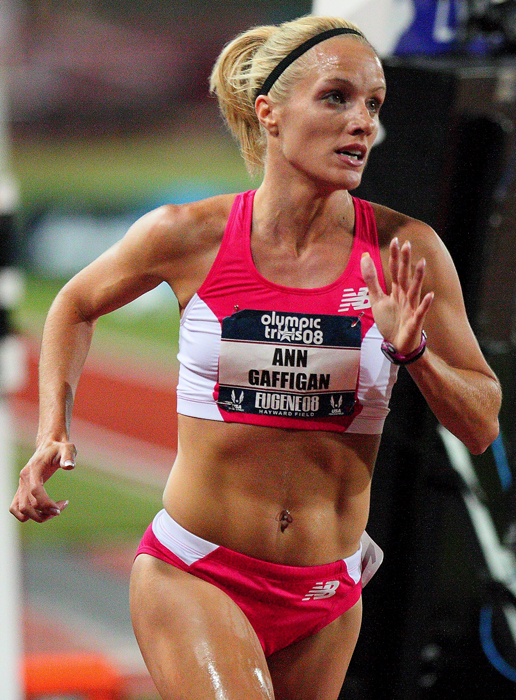 The 2008 U.S. Olympic Track & Field Trials was not just a track meet; it was a track-a-palooza.

I landed in Portland, Oregon, and took the Athlete’s shuttle to Eugene, where the meet took place.  As we approached “Track Town USA”, I started to see billboards with phrases like “Home of the Hardest Team to Make” and “Where You’re Fired for Being 0.01 Seconds Late”, punctuated by the Nike swoosh.

As the shuttle neared my drop-off at the Living Learning Center, a dormitory rented out to athletes during the Trials, we passed the famous Track Town Pizza and a bar that had a large Adidas banner hanging above its front door.  The time had finally come.

I stayed in Lincoln, Nebraska, to be coached by my collegiate coach, Jay Dirksen.  I worked hard to balance the training, the recovery and sleep, the proper nutrition, and the job to pay the bills.  The 2008 Trials were the light at the end of the tunnel.

Since 2004, more women have tried the steeplechase and those who already were doing it honed their hurdling skills, water jump technique, and training to perfect the art of the event.  The American record had been re-set twice since I had set it and several women were threatening to break it again SOON.  It was definitely going to be one of the “hardest teams to make”.

Only the top three women in the final would qualify for the U.S. Olympic Team and many more than three wanted to make that team.  BADLY.  This was the first shot at the Olympics for all of us steeplechasers.

The prelims were held on Monday night, June 30, and it gave us all a taste of why Eugene is considered the “mecca of track & field”.  I couldn’t hear my own breathing as we raced down the backstretch as the crowd stomped in unison on the historic Hayward Field stadium bleachers.  This is the prelim, right? I felt great in the prelim and easily advanced to the Final.  I was elated, as it was the best I had felt in any race so far this season.  I had some ups and downs in training leading up to the Trials, so it was a relief to feel like myself out there.

I bought some earplugs to drown out the outside noise that began early in the morning on campus (maybe it wasn’t the best idea to stay in a building that was right in the middle of all of the action) and tried my best to kill time for the next 3 days without going insane.  It wasn’t easy!

On Thursday, July 3, I tried to sleep in as late as possible, as my race wasn’t until 9:45pm.  I spent the day eating, reading texts and e-mails from friends and family, doing a light jog, listening to music and journaling.  I wrote in my journal that afternoon “SHOW THEM THAT 2004 WASN’T A FLUKE”.

I had not run nearly as fast as I did at the Trials in 2004 since then, so I was determined to make a comeback. The starter shot the gun and we were off.  I was wearing a bright pink uniform that my sponsor, New Balance, had just given me the day before, specifically for the final.  I felt fast and fit and powerful.  The pace was quick.  No one was messing around.  I felt great, just like in practice on my good days.  Don’t get too excited.  We were going so fast, lap after lap.  And yet I was still in 6th place.  Some of them have to come back to me.  They can’t all handle this pace.  Be patient.  But everyone had brought their “A” game.  No one was dying up there.  And then I started to get passed.

This is the part of the race where you might feel sorry for yourself and think “It’s not going to happen the way I’d like it to happen, so I might as well just coast until the finish”.  But this was the Olympic Trials.  Some people would give anything for the chance to just compete here.  I had friends and family that had bought plane tickets and hotel rooms to come cheer me on.  Several of my friends and my sister-in-law had each painted a letter from “G-O A-N-N” on their abs and stood with their shirts up in the cool evening breeze to show their support.  They had spent the day handing out pink leis from a party store to anyone who promised to cheer for me.  So there was going to be no feeling sorry for myself today.  I was one lucky girl.

I ran hard through the finish line and looked up first at the scoreboard and then towards the stands where my family was sitting.  Then I collapsed in exhaustion on the track.  I hadn’t reached my goal of making the hardest team to make, but I had done everything I could to go for it and isn’t that what someone said about life? That it’s the journey and not the destination?

Ann Gaffigan has competed professionally in the steeplechase since winning the 3000m steeplechase at the 2004 USA Championships, setting a then-American Record of 9:39.35. She last competed in the 2008 Olympic Trials, finishing 10th.   She is currently a computer programmer/web systems developer who runs the site steeplechics.com .

The Hardest Team to Make