An Interview with Steeplechic Lisa Galaviz

Lisa Galaviz came into the 2008 Olympic Trials as the American Record holder in the 3000m Steeplechase. In the final, she placed 5th-out of the Team spots-as winner Anna Willard took down her record. Frustrated, Galaviz decided she needed a change. She is now working with Wynn Gmitroski and doing some altitude training for the first time. Here, she discusses how and why she made her decision to change her training and coaching situation, and how things have been working out so far. She also gives her opinion on the new IAAF Diamond League and the WADA one-hour rule and explains how she balances training and a day job. 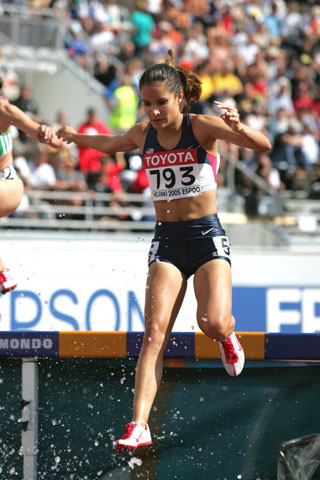 Can you tell us why you decided to change coaches and how you found anew coach? This is not something that is easy to do–find a new personyou can trust that (hopefully) is located near you. Describe theprocess, from deciding to switch coaches to finding the one you’reworking with now.

After the Olympic Trials, I decided that I needed a change. I thinkit’s very hard for colleges coaches to give the attention needed toprofessional athletes (Lisa had previously been working with Louie Quintana, coach at Arizona State). The two main things I was looking for in a newcoach was someone who coached only a few athletes and someone who hadsuccess on the world level. I was in Belgium this past summer racing,stressed about finding a new coach. I went on a morning shake-out runand ran into a friend, Gary Reed who I had met a couple years earlierand hadn’t talked to since. We were just catching up, and he mentionedthat he trained in Scottsdale, Arizona over the winter (at this point,he didn’t even know I lived in Arizona). Two hours later he introducedme to his coach, Wynn Gmitroski and we talked for a good hour. I reallyliked Wynn and fortunately he was interested in coaching me. So,everything just kind of just fell into place and I found someone who’d hadsuccess at the world level, coaches a handful of athletes, and livedpart-time in Arizona.

Describe how the depth in the steeple in the US has changed since youwere first steepling in college. Are the types of athletes doing itdifferent? Is it easier to find competitive races? Are more athletesdoing it now or just better athletes?

The steeplechase is much more competitive now and I think more womenare doing it because it’s a World Championship and Olympic event. Idon’t know if I’d say it’s easier to find competitive races, since theGrand Prix meets in the US still don’t have women’s steeplechase, buthopefully this will change with theIAAF Diamond League…

Have you heard about the IAAF Diamond League, to start in 2010? Finally, they are structuring it so that events get equalopportunity: 16 events each for men and women (32 total) will befeatured equally throughout the Diamond League Series, and thecompetitors will be awarded the same prize structure for each event, asopposed to valuing some events higher than others. The PrefontaineClassic and Reebok Grand Prix are part of this new League, meaning it islikely at least one of them will include the women’s steeple, which hasnot been the case thus far. How does this affect the women’s steeple inthe United States and worldwide? How will it affect planning yourseason?

I think the IAAF Diamond League is a great idea! It should increasethe popularity of the sport by forcing more head-to-head competitionsamong top athletes. Featuring the events equally among the series willgive women steepler’s more opportunities to race than before. Hopefullythe Prefontaine Classic or Reebok Grand Prix will have the women’ssteeple and this will create more interest in the event in the U.S. Ilost count of how many people at my work ask me if I ride horses!

What do you think about the new WADA regulations (the one-hour windowrule)? How different is it than what they required before?

I like the new WADA one-hour rule. I find it much easier to give onehour every day that I’ll be home, rather than trying to designate whereI am all the time. Although, in the past, USADA used to call ouremergency contact when weren’t home to find out where we were. This isno longer allowed as it gave athletes a ‘heads-up’ that they were goingto be tested.

You’re in Flagstaff right now, training at altitude, correct? Have youever done altitude training before? What do you think about it?

I was in Flagstaff for two weeks training at altitude, but I’m homenow. We’re going back for another three weeks at the end of April.This was my first time training at altitude and I really enjoyed it.The purpose of every day was running, and there were no distractions.It was very intense and focused. There is a large distance runningcommunity in Flagstaff. I’m not sure if you’ve heard, but NAU shut downtheir High Altitude Training Center. Right now, there’s a bit of chaosas to what is going to happen with it. I hope this doesn’t hurt all theathletes training up there, during the interim.

Tell us a little bit about your non-running day job? What do you do?How much are you working? Are they flexible when you need to leave tocompete or train at altitude? Do you sometimes work from thoselocations when you’re gone?

I work as a computer engineer at General Dynamics 20 hours a week. Theyare very flexible and I’m able to work remotely from anywhere as long asI have an internet connection. While training in Flagstaff, I was ableto work my full 20 hours per week.

I recently competed in the Olympic Track & Field Trials in the 3000m steeplechase, an Olympic event for the first time this year (2008). I'm moving to Long Beach, California in November and own my own web development company.

This template supports the sidebar's widgets. Add one or use Full Width layout.